In the previous article, we already have a certain understanding of the evaporator. This article will continue the partition heat transfer evaporator.

Commonly used partition wall heat transfer evaporators can be roughly divided into two types: circulating type and single pass type according to the situation of the solution staying in the evaporator. 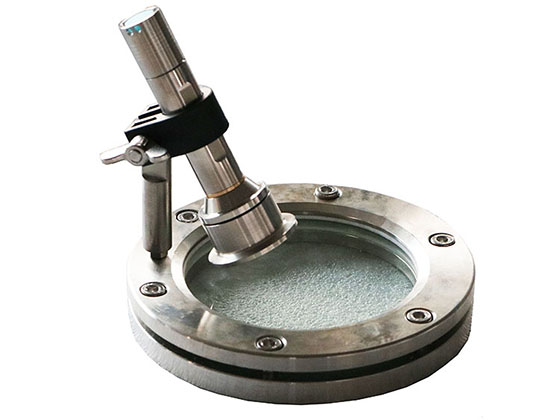 In this type of evaporator, the solution circulates in the evaporator. Due to different causes of circulation, it can be divided into natural circulation and forced circulation.

In order to have a good circulation of the solution, the cross-sectional area of the central circulation tube is generally 40 to 100% of the total cross-sectional area of other heating tubes; the height of the heating tube is generally 1 to 2m; and the diameter of the heating tube is between 25 to 75mm. In addition, its commonly used valve types are mainly 1.5 tri clamp valve or butterfly valve food grade. This type of evaporator is widely used due to its compact structure, convenient manufacturing, good heat transfer, and reliable operation. However, due to structural limitations, the cycle speed is not large. In addition, the solution is continuously circulated in the heating chamber, so that its concentration is always close to the concentration of the completion liquid. So the boiling point of the solution is high, and the effective temperature difference is reduced. This is a common drawback of circulating evaporators. In addition, the cleaning and maintenance of the equipment is not convenient enough, so it is difficult for this evaporator to fully meet the production requirements.

The above-mentioned natural circulation evaporator, the circulation speed is not large enough, generally below 1.5m/s. In order to make the evaporator more suitable for evaporating solutions with high viscosity, easy to crystallize or serious fouling, it needs to increase the solution circulation speed to extend the operation cycle and reduce the number of cleaning.

The main disadvantage of this type of evaporator is the large loss of temperature difference caused by the static head effect of the liquid column. In order to maintain a certain effective temperature difference, the heating steam needs to have a higher pressure. In addition, the equipment is huge and consumes a lot of materials, requiring a large factory building. In addition to the above natural circulation evaporator, a forced circulation evaporator is also used when evaporating materials with high viscosity, easy to crystallize and scale. In this evaporator, the circulation of the solution mainly depends on the external power, and it is forced to flow in a certain direction with a pump to produce circulation. The size of the circulation speed can be controlled by the flow adjustment of the pump, which is generally above 2.5m/s. The heat transfer coefficient of the forced circulation evaporator is also larger than that of general natural circulation. But its obvious shortcoming is that the energy consumption is large, and the heating area per square meter needs about 0.4 to 0.8kW.

The main feature of this large type of evaporator is that the solution only passes through the heating chamber once in the evaporator, and becomes concentrated liquid without circulating flow. When the solution passes through the heating chamber, it flows in a film shape on the wall of the tube, so it is also commonly known as a liquid film evaporator. According to the different flow directions of materials in the evaporator, the single-pass evaporator is divided into the following types.

Its heating chamber is composed of many vertical long tubes. The diameter of a commonly used heating tube is 25-50 mm, and the ratio of tube length to tube diameter is about 100-150. The feed liquid is introduced from the bottom of the evaporator after preheating, boils in the heating tube and quickly vaporizes, and the generated steam rises at high speed in the heating tube. Generally, the suitable outlet steam speed when operating under normal pressure is 20-50m/s, and the steam speed when operating under reduced pressure can reach 100 to 160m/s or more. The solution is driven by the rising steam, which rises in a film along the tube wall and continues to evaporate. The vapor-liquid mixture is separated in the separator 2, the completed liquid is discharged from the bottom of the separator, and the secondary steam is discharged at the top. It should be noted that if the amount of water evaporated from the feed liquid is not large, it is difficult to achieve the above-mentioned required steam speed, that is, the rising film evaporator is not suitable for the evaporation of a concentrated solution. It is also not suitable for materials with high viscosity and easy to crystallize or scale. 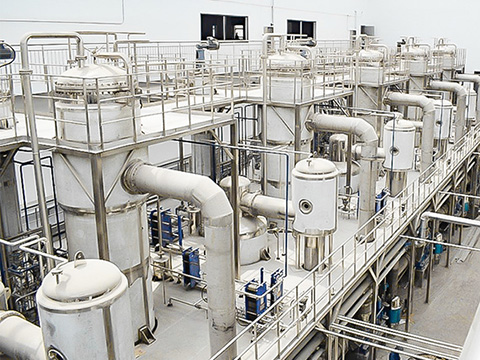 Because the solution flows like a film in a single-pass evaporator, the convective heat transfer coefficient is greatly improved, so that the solution can reach the required concentration in one pass in the heating chamber without recirculation, so it has a larger value than the circulating evaporator. advantage. The benefits of not circulating the solution are: (1) the residence time of the solution in the evaporator is very short, so it is particularly suitable for the evaporation of heat-sensitive materials; (2) the concentration of the entire solution is not always close to the completion liquid like the circulating type. The effective temperature difference of this evaporator is relatively large. The main disadvantage is that it is quite sensitive to fluctuations in the feed load, and it is not easy to form a film when the design or operation is not suitable. At this time, the convection heat transfer coefficient will decrease significantly.