The condenser is a glass instrument that uses the principle of heat exchange to cool condensable gas and condense it into a liquid. There are three types of straight, spherical and snake-shaped, the specifications are expressed in length (mm), there are more than 150 ~ 350.

The inner tube of the condensing tube has bulges at both ends, which can be connected to other equipment of the experimental device, so that hotter gas or liquid flows through the inner tube and condenses. The outer tube often has openings on both sides, which are connected to plastic tubes that carry cooling substances (such as water). When in use, the lower opening of the outer pipe is usually connected to the faucet, because the water will automatically flow upward when it encounters heat in the condenser pipe, which achieves a greater cooling effect.

The purpose of the condenser

It is used in the preparation of distilled liquid or organic, and plays the role of condensation or reflux. Reflux devices and distillation are commonly used in condenser tubes.

The condenser tube is usually used on the flask to be tested under reflux or on the distillation flask when the condensed liquid is to be collected.

Vapor condensation occurs on the inner wall of the inner tube. The space enclosed by the inner and outer tubes provides the water area with the function of absorbing steam heat and removing the heat. There is often a high water pressure at the water inlet. To prevent the water pipe from falling off, the plastic pipe should be fastened with a pipe bundle. When used under reflux, a rubber stopper should be inserted into the lower glass tube of the condenser tube so that it can be inserted into the mouth of the flask to receive the vapor evaporated in the flask. 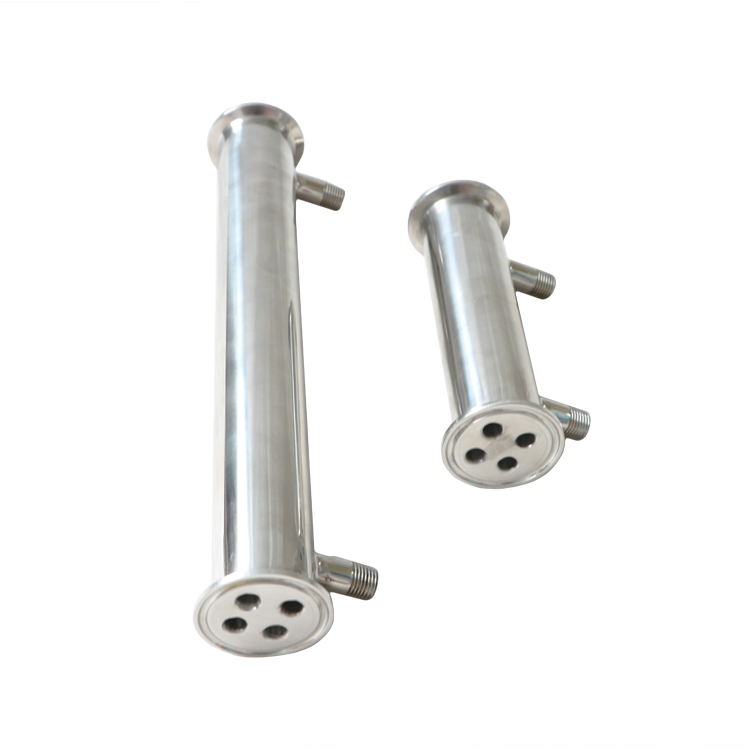 When there are volatile liquid reactants, in order to avoid the loss of reactants and make full use of the raw materials, a condensation reflux device should be designed in the generating device, so that the substance returns from the gas state to the liquid state after condensation, so as to reflux and collect. The laboratory can be realized by installing long glass tubes or condensate return tubes in the generator.

It is composed of straight glass tubes combined inside and outside. It is mostly used for distillation operation. The steam temperature is less than 140 degrees, not for reflux. There are connecting pipe joints on the upper and lower sides of the outer pipe, which are used as water inlets and water inlets.

The inner tube is connected by several glass balls, used for the reflux of organic preparation, and is suitable for various boiling liquids. After long-term use, the rust in the spacer can be washed away with hydrochloric acid. However, the condensed liquid solidifies in the glass ball after solidification. The hose is easy to fall off due to the high water pressure at the water inlet, and it should be tied with iron wire during use.

Reflux for organic preparation, is suitable for liquids with lower boiling points.

Condensing pipes are widely used, if you have this need, you can log on the following website for detailed information.