Evaporation is a unit operation of concentrating solution and the vapor pressure of most solutes tends to zero, so it cannot be volatilized. The heat exchange intensity and production capacity of falling film evaporator depend on the uniformity of feed liquid distribution along the heat exchange tube. Uniform distribution not only means that the liquid should be evenly distributed in each pipe, but also the uniformity should be maintained throughout the length of the pipe. When the feed liquid cannot evenly wet the inner surface of all the tubes, the surface of less liquid may become scaling due to evaporation. Fractional distillation column is in charge of separating substances from the mixture. In cannabis-processing process, falling film evaporator is to get ethanol evaporated. In this way, we can get purified CBD and ethanol can also be recycled. 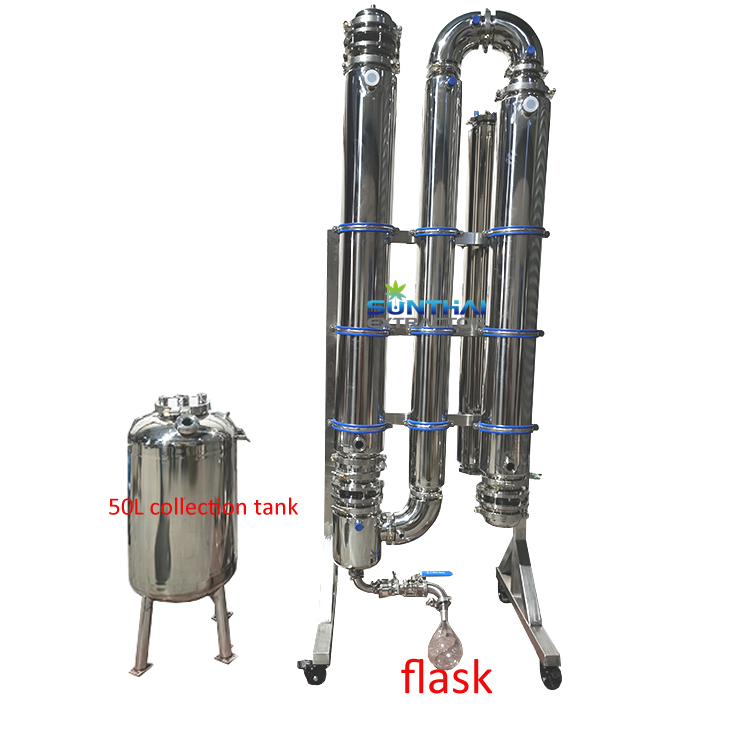 lThe flow direction of the forward flow is the same as that of the steam and both flow from the first effect to the last effect. The downstream process is generally suitable for the treatment of heat sensitive materials at high concentrations.

lCountercurrent of methanol distillation column refers to the reverse flow of feed liquid and steam when the raw material is successively fed into the front effect by the pump from the final effect and the completion liquid is discharged from the first effect. Generally, it is suitable to deal with the solution whose viscosity varies greatly with temperature and concentration.

lMixed flow is a combination of forward flow and countercurrent processes, so it has both advantages. But the operation of mixed flow is complex and requires a high degree of self-control.

lAll the effects of flat flow in carbon steel distillation column have crystallization precipitation and can separate crystallization in time, which is generally used for evaporation of saturated solution.

lThe feed liquid of the automatic distillation column is added from the top of the evaporator and drops along the tube wall under the action of gravity. In this process, a concentrated solution is obtained at the bottom.

lDue to the film flow of the solution in the one-way evaporator, the heat transfer coefficient is high. Therefore, it is suitable for processing heat sensitive materials.

lStainless steel distillation column is suitable for evaporation and concentration of foaming materials.

Vacuum distillation column is widely used in evaporation and concentration of water or organic solution in pharmaceutical, food and chemical industries. In addition, it can also be widely used in the above industries, especially for heat sensitive materials. The ethanol distillation column has the advantages of high evaporation capacity, energy saving, low operation cost and can ensure the invariance of materials in the evaporation process when it is continuously operated under vacuum and low temperature conditions.