Liquid-liquid extraction is also called solvent extraction or extraction. The process of separating and extracting components in a liquid mixture with a solvent. Add the selected solvent that is immiscible (or slightly miscible) with the liquid mixture, and use the different solubility of its components in the solvent to achieve the purpose of separation or extraction. For example, benzene is used as a solvent to separate phenol from coal tar, and isopropyl ether is used as a solvent to recover acetic acid from dilute acetic acid solution. In the laboratory, instruments such as a separatory funnel are used.

In most cases, one liquid phase is an aqueous solvent and the other liquid phase is an organic solvent. The selectivity and separation efficiency of the extraction process can be controlled by selecting two incompatible liquids. In the water and organic phases, the stronger the hydrophilicity of the hydrophilic compound is, the greater the degree is, to which the hydrophobic compound will enter the organic phase. Generally, analytical chemists first isolate the test substance of interest in an organic solvent. Then, because the commonly used solvents have a high vapor pressure, the solvent can be removed by evaporation to concentrate these test substances. 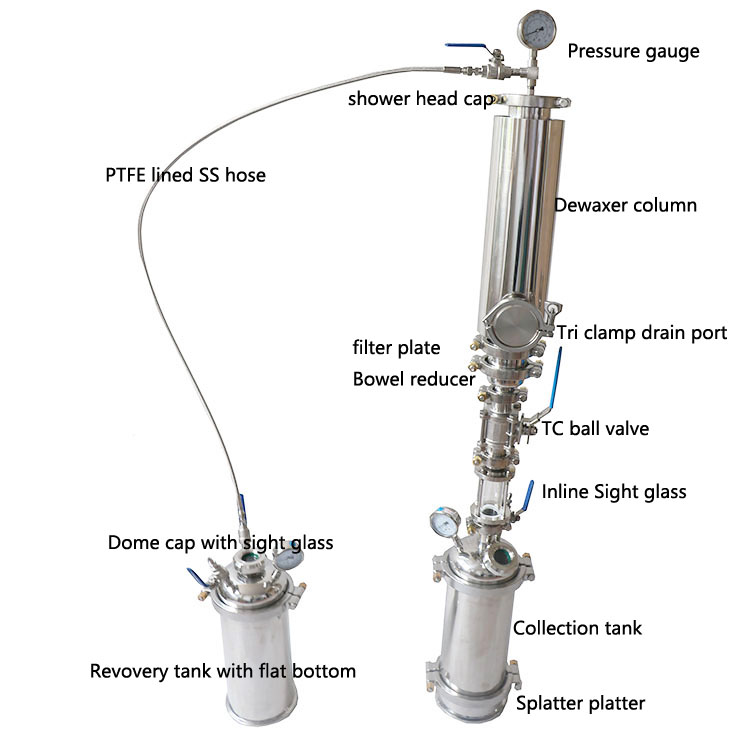 The conventional liquid-liquid extraction method uses a separatory funnel and requires 10-1000 ml of liquid phase (each one). For one-step extraction, in order to obtain a greater recovery rate (up to 99% in a certain phase), the partition coefficient KD must be greater than 10, because the comparison (Vo / Vaq) must be maintained between 0.1-10. In most liquid-liquid extraction methods of separating funnels, two or more extractions are required for quantitative recovery. Chromatographic analysis is often used to extract organic matter from the water phase with water-insoluble organic solvents. The commonly used extraction vessel is a separatory funnel.

If you want to extract well, keep in mind the calculation formula of the liquid-liquid extraction method. We can provide essential oil extractor, 5lb closed loop extractor, 1lb bho extractor kit and so on, if interested, welcome to contact us!