Home / Information / Knowledge / The Introduction to Evaporator (one)

The Introduction to Evaporator (one)

The evaporator is divided into three types according to operating pressure: normal pressure, pressurized and decompressed. According to the movement status of the solution in the evaporator:

(2) One-way type. The boiling solution passes through the heating surface once in the heating chamber, and the concentrated liquid is discharged without circulating flow, such as rising film type, falling film type, stirring film type and centrifugal film type.

(3) Direct contact type. The heating medium directly contacts the solution to transfer heat, such as submerged combustion evaporator. During the operation of the evaporation device, a large amount of heating steam is consumed. To save heating steam, a multi-effect evaporation device and steam recompression evaporator can be used. Evaporator is widely used in chemical industry, light industry and other departments. 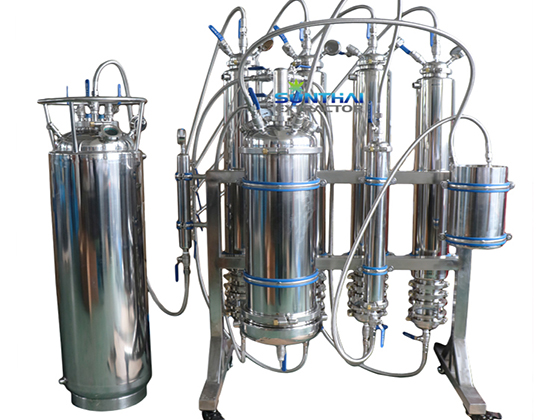 1. According to the evaporation method

Natural evaporation. That is, the solution evaporates at a temperature below the boiling point, such as seawater drying salt. In this case, the solvent vaporizes at a low rate because the solvent only vaporizes on the surface of the solution.

Boiling evaporation. Heating the solution to the boiling point is to make it evaporate in boiling state. Industrial evaporation operations are basically of this type.

2. According to heating method

Direct heat source heating. It is the evaporation process of mixing fuel and air to make the high-temperature flame and flue gas produced by its combustion directly sprayed into the evaporated solution through the nozzle to heat the solution and vaporize the solvent. The equipment you need to use at this time is vacuum clamp, vacuum adapter and distillation column.

Indirect heat source heating. The walls of the container are passed to the evaporated solution. That is, the heat transfer process in the partition wall heat exchanger.

3. According to operating pressure

It can be divided into normal pressure, pressurized and reduced pressure (vacuum) evaporation operations. Obviously, heat-sensitive materials, such as antibiotic solutions, fruit juices, etc. should be carried out under reduced pressure. The high-viscosity materials should be heated by pressurized high-temperature heat source (such as thermal oil, molten salt, etc.) for evaporation.

4. According to the number of effects

The evaporator has a metal circular basin with an inner diameter of φ200mm and a height of about 100 mm.

The evaporator is a metal circular structure, the inner wall should be smooth, and the evaporator blade must not have defects such as burrs or bumps.

All parts in contact with water should be smooth, and the welding seams of their joints should be tight and firm, and there should be no water leakage.

The assembly of the evaporator parts and components should be correct, and there must be no looseness, deformation and other defects that affect the use.

The protective layer applied to the parts and components of the evaporator shall be firm, uniform and smooth, and shall not have defects such as delamination and corrosion.

The evaporator and the installation frame should be easy to install, and can make the evaporator not disconnected due to the influence of wind during normal use.

Falling film evaporation is to add the feed liquid from the upper tube box of the heating chamber of the falling film evaporator, and evenly distribute it to each heat exchange tube through the liquid distribution and film forming device. Under the induction of gravity and vacuum and the action of airflow, it flows into a uniform film from top to bottom. The equipment you need to use at this time are vacuum stainless steel clamps, vacuum adapter fittings and vacuum extractor.